Bazoef Petfood’s dog food is produced from the larvae of the darkling beetle. These larvae are also called “mealworms”.

Produced in France, mealworms are fed there exclusively on local agricultural co-products, such as wheat bran.

The darkling beetle is a hardy, shiny beetle. It is approximately 16mm long.

The female lays an average of 400 to 500 eggs. The eggs hatch after a few days. The larvae that come out are about 2 mm. First white, they take on a golden yellow tint as they grow. The larva reaches an average of 30 mm in length. In farms, it is at this stage that most of them are harvested.

A fraction of the larvae is however retained for the next reproductive cycle and turns into a nymph. The insect spends two to three weeks at this stage before emerging as a winged adult. Depending on environmental conditions, the mealworm’s complete cycle can last between four months and two years.

Why the Darkling Beetle? 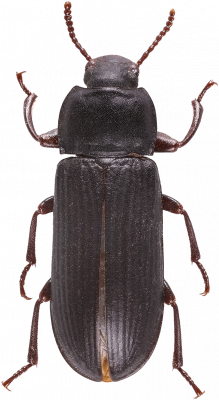 Try them out for just 2€

Ask your dog what he thinks of our insect kibble.
The sample allows you to see how much your dog will love it.